The family have a long and significant history in the south-west's agricultural industry with the original farm dating back to the early 1900s when the current owner's father emigrated from Italy and planted citrus a large citrus orchard. Over the following years, the farm grew and the business diversified to also include sheep and cattle. Of course, like many of Italian migrants, the family made their own wines.

From humble beginnings, the second generation evolved the winery business from vineyards into wine production under the Harvey River Estate label in 1999. The first commercial vintage was produced in 2000 and the business went on to be awarded the Jimmy Watson award for its 2009 Joseph River Cabernet.

In 2015 a new cellar door, warehouse and administration building was built on the banks of the Harvey River, being only 50m from the original cellar door which allowed access to the now-famous ‘Big Orange’ on Third Street to be retained.

The Harvey River Estate vineyards are just 800m away on Fifth Street, with almost 50 acres under vine planted to Chardonnay, Shiraz and Cabernet Sauvignon. 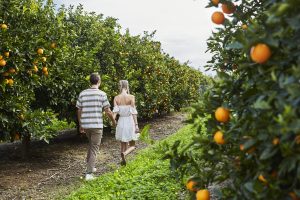 Escape for a little Italian adventure in Geographe - no Passport required!  A visit to the cellar door at…