Saint Nicholas Anglican Church (1840s) is a historic pioneer church made of Jarrah and measuring only 3.8 × 6.7m. It claims the distinction of being the smallest church in Western Australia.

The building was erected opposite the Prince of Wales Hotel - now Henton Cottage, so named for John Allnutt’s home village in England. At that time, the road between was known as Paris Street and formed part of a grandiose plan then in place for Australind. (This plan can be viewed on the Stone Seat Memorial on the shores of Leschenault Estuary.)

The first known resident of the cottage was William Narroway who arrived in 1844 and was employed by John Allnutt.

The walls were made from local Jarrah planks. It is hard to imagine this tiny cottage was partitioned into two rooms, one of which had a fireplace, and that a family lived in it for many years. At first the roof was thatched with rushes from along the estuary, but this was later replaced by corrugated iron.

In the 1850’s it was converted by the Allnutts into an Independent - now known as Congregational - Chapel. Up to then, John Allnutt had held services in his home.

The Church was licensed and consecrated on 22nd December 1915 and renamed as St Nicholas Church. St Nicholas was named for the 4th century Bishop of Myra in Asia Minor, the patron saint of Seafarers and children. 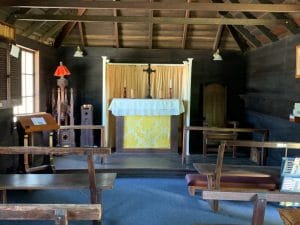 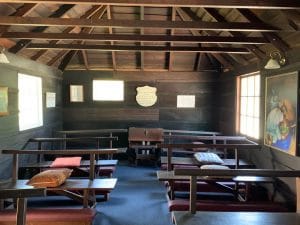 Leschenault Waterways Discovery Centre & Jetty Walk is where you can learn about the estuary environment,…