Located in the Stirling Cottage Precinct is Stirling Cottage, a replica of the 1880's homestead built by the first Governor of WA - Governor Stirling. Featuring a delightful café, you can sit on the verandah overlooking the tranquil Harvey River and relax with a hot drink, cake or light meal.

Afterwards, stretch your legs as you walk around the stunning heritage gardens surrounding the cottage. May Gibbs (creator of those adorable gumnut babies, Snugglepot and Cuddlepie) lived in the original Stirling Cottage during her childhood. It is believed that May drew much of her inspiration for her bush stories and illustrations from her experiences while living in Harvey.

The History of Stirling Cottage

In the mid-1800’s, the first Governor of Western Australia, Governor Stirling, selected 12,800 acres of fertile land in Harvey, naming it the ‘Harvey River Settlement'. The only improvement he made to the land was to build a cottage, known as “The Hut”. This convict built cottage, on the banks of the tranquil Harvey River, featured a shingled roof and ‘pit-sawn’ jarrah walls with hexagonal-shaped paving blocks fitted together to form firm flooring. One of the original paving blocks can be seen in the Cottage history room today. As the ‘Harvey Estate’ was sold quite a few times over the years, the ‘cottage’ was home to many pioneering farming families.

In 1885 and 1886, the author May Gibbs, creator of Snugglepot and Cuddlepie, lived in the cottage along with her family. It is believed that May Gibbs drew much of her inspiration for her stories and illustrations from her experiences in Harvey. The original cottage was surrounded by gardens and fruit trees and had a cellar that was often flooded in winter. A blacksmiths workshop and stables were added. Over the years, the cottage fell into disrepair, and by the end of the 1960s, only a few bricks and stones remained. A lone pine tree marked the site of the Cottage, but this was blown down during a storm in 1985.

On Sunday 9th October 1994, the replica 'Stirling Cottage' was opened to the public. Modelled on the original ‘Stirling Cottage', this building features the shingled roof, jarrah walls and hexagonal paving blocks of the original. A balcony has been added overlooking the tranquil Harvey River. The 1994 version of the cottage is located 500 metres downstream from the original site and features extensive landscaped Heritage Gardens, a 19th-century style fountain, a mini orchard, enchanting secret garden and a gift shop, a room on local history and 'Stirling Cottage Kitchen’ tearooms. Enjoy a light lunch or afternoon tea on the balcony overlooking the peaceful River, or in winter sit by the cosy log fire and enjoy hearty homemade soup.

Public toilets are located next to the cottage in a separate building called 'The Stables’. 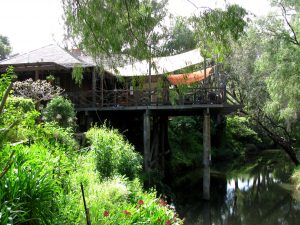 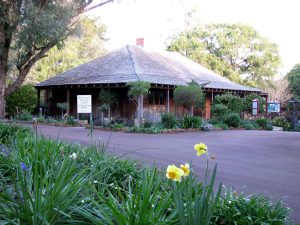 The Harvey Dam is beautifully landscaped for everyone to enjoy. Pack a lunch and make use of the free…